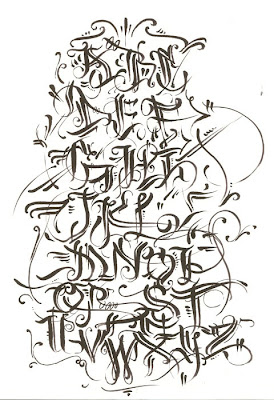 Graffiti Alphabet Calligraphy in Several Design Sketches Letters A - Z
Graffiti Alphabet in different design motifs from the usual. This time the graffiti artist to do a little design innovation in the manufacture of graffiti sketch that will be the basis of the actual making of graffiti. Usually the letters A - Z artists create designs that have been widely used, especially the environment of graffiti today. Take for example such as Bubble, ThrowUp, Wildstyle, and so forth. Because to avoid feeling bored and wanted to create something different then this is done. Innovation or idea of making graffiti alphabet derives from the art of calligraphy that has been widely used in middle east region. Calligraphy has been famous for painting a delicate and complicated with high precision while making it. The actual style of Arabic letters are often used to implement on a different object that is in Latin letters that have been known and used banyk most people in this world (Letters A - Z).
Please give your comments about this graffiti image, Thanks....
Email ThisBlogThis!Share to TwitterShare to FacebookShare to Pinterest
Labels: Graffiti Alphabet, Graffiti Letters